I've created a video tutorial for setting up Hammer as well as being able to see player models that may be invisible in Hammer. You can view that here:

I'll also give you a version in text here as well.

1) First off you'll want to make sure you use the the Hammer editor that comes with PVK2. There's no need to use the one that comes with Source SDK Base 2013 Multiplayer. PVK2 comes packaged with Source 2013 stuff, so you should use the PVK2 tools instead.

3) Navigate to the sdkbase_pvkii\bin directory.

4) If you haven't launched Hammer before, launch hammer.exe

5) At this point Hammer will generate a file called GameConfig.txt in that directory. It is pre-configured for use with Half-Life 2.


For advanced users you can simply copy my configuration and modify to fit your Steam paths and such. Here is a pastebin of my configuration: https://pastebin.com/Q5HD9sKF If you do this, skip steps 6-9


6) In Hammer, if you go to Tools->Options->Game Configurations, you can create a new configuration for PVKII. Click Edit->Add and give it a name you want like PVKII. Optionally you can edit the "Half-Life 2" one instead or outright remove it. 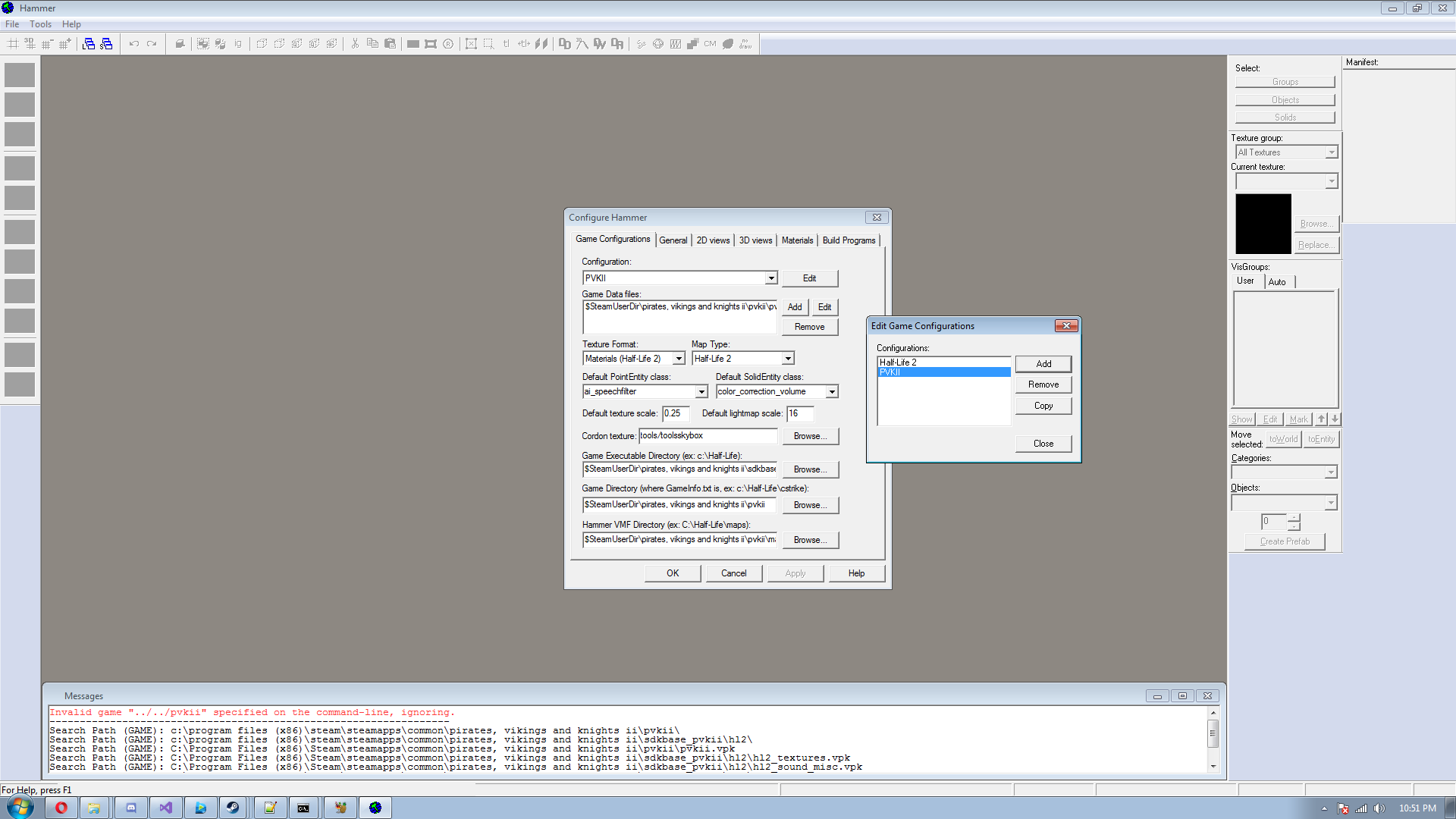 7) Under "Game Data Files" add "pvkii.fgd" from your "pvkii" directory. Do NOT bother "pvkbase.fgd", pvkii.fgd automatically includes pvkbase.fgd and in the next update pvkbase.fgd will no longer be there anyway.

8) The cordon texture should be "tools/toolsskybox" without the quotes, which I forgot to mention in the video. Set your default entities however you like.

9) Setup your paths under Game Configurations and Build Programs appropriately, here are mine for reference:

Place compiled maps in this directory before running the game:
$SteamUserDir\pirates, vikings and knights ii\pvkii\maps

To fix player models or some other models appearing invisible in Hammer or partially visible, open up a text editor like Notepad or Notepad++ (NOT WordPad or Office) and create a new file. Paste in "hammer.exe -game ../../pvkii" without the quotes and save it as "hammer_pvkii.bat" in the sdkbase_pvkii\bin directory where Hammer is.

ALTERNATIVELY, if you've added Hammer as a non-Steam game in Steam you can right click on it and click on Properties->Set Launch Options. In the text box just put "-game ../../pvkii" without the quotes, and Hammer will show the player models correctly.

To use player models for team based spawn entities like info_player_pirate instead of the green Gordan Freeman one, open up the "pvkii.fgd" file which is located in your "pvkii" directory.

Search for "info_player_pirate" (Should be line 58)

Do the same for info_player_viking and replace it with "models/player/berserker/berserker.mdl"

Do the same for info_player_knight and replace it with "models/player/heavyknight/heavyknight.mdl"

Save and re-launch Hammer. Your spawns should now use PVK2 player models: 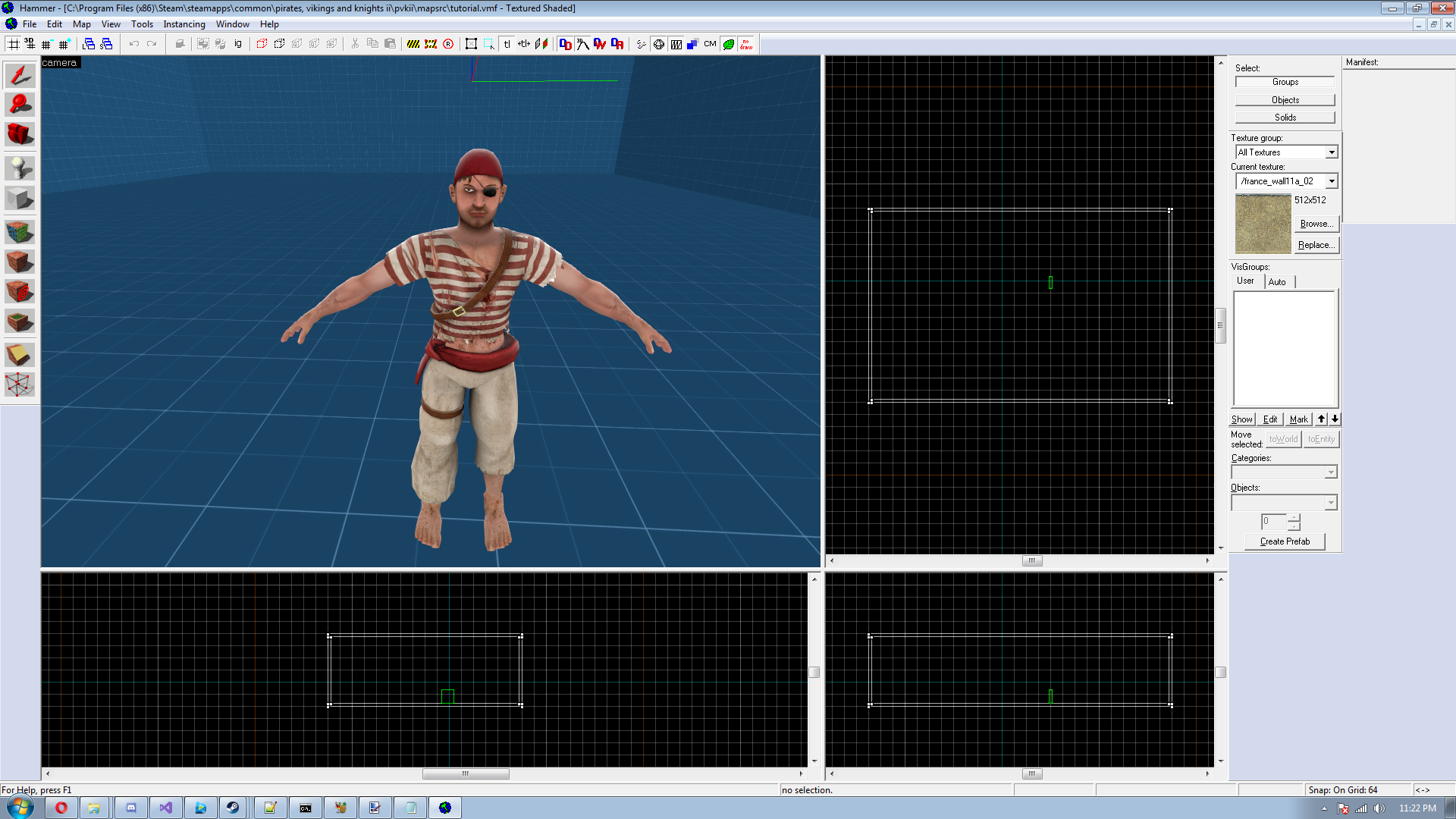